In this month's blog I would like to share an uplifting and encouraging story about a very special patient of ours.  Please meet Moose: 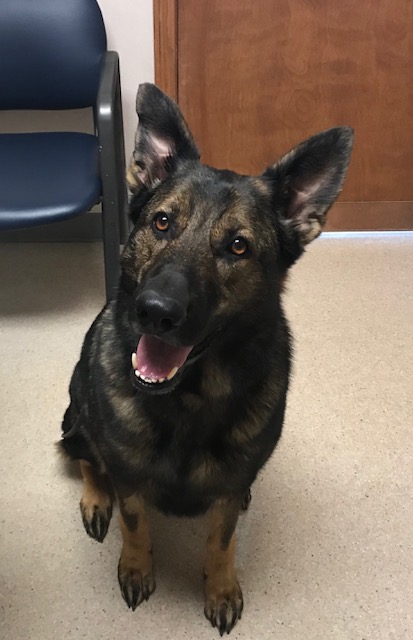 Moose came to us as a new puppy a few years ago.  Moose's family had another, older German Shepherd Dog, Bear, who has since passed.  Bear was a faithful and instrumental partner in his human mom's ministry involving visitation of hospitalized patients, particularly those fighting cancer.  As Bear began to slow with age, it was apparent that he did not have the endurance to as easily tolerate the long visits that were frequently required to help bring comfort to these families.  Bear's mom continued to feel called and led toward this kind of ministry, but heartbroken that her partner could no longer assist her.  Bear was often the vehicle necessary for connection with the people they served.  He provided not only comfort in a way that only animals can, but a door to open conversation and the sharing of faith and hope.  Bear's mom was going to eventually need another partner, but it was very obvious that not just anyone would be able to fill Bear's shoes.  He was a one-in-a-million dog.
As soon as Moose came into their home, it was clear that he had a big personality, and a lot of energy!  The sequence of events that led to his addition to the household weren't exactly as the family had mapped out.  However, over time, and much patience, is was gradually revealed that he was the dog for the job and just the partner that his mom needed.  Though, this didn't come without many trials, tears, doubts, and disappointments along the way.  There were health set backs as well as questions as to whether he would ever mature to have the quiet, even temperament necessary for certification as a therapy dog.
As an adolescent, Moose would become particularly excitable around other dogs.  Though still a puppy by age, he had grown quite large and also had a deep, intimidating voice that was especially boisterous when he was approached by another dog.  Many times we could tell Moose had entered the veterinary clinic without even seeing him.  He would consistently announce his arrival with a deep-throated woof.  His mom knew that this sort of behavior would not earn him points with those that would help decide whether he would be allowed entrance into hospitals and other facilities to visit with patients.  So began the long and hard work of patiently training him to exhibit more acceptable behaviors.  It did not happen overnight, but little by little, small improvements began to appear.
Moose's mom was diligent to take him to obedience classes regularly.  In addition, she found every opportunity possible to socialize him with different people and dogs.  She would frequently bring him to the clinic for "happy visits" and take walks through the park where she knew he would see other dogs.  Initially, they would have to keep their distance and visit from afar, but gradually she was able to bring him closer and closer to the other dogs without incident.  Over time, our staff, and many of the regulars at the park were noticing a difference in Moose.  Surprisingly, he and his mom could more easily sneak in our office without a peep.  There were times when his mom was at wit's end and struggling to hold out hope that he would ever come around.  Moose has gone on to prove everyone wrong and has become one of the most well behaved and mannered patients we see.
Moose and his mom now regularly visit and help comfort patients in the hospital, and have more recently found a particular connection with Alzheimers and dementia patients.  Moose's mom says it is amazing the light she can see in the eyes of these patients when they see Moose by her side.  Many times he brings out communication or interaction that the patient's family or caretakers have not seen in a long time.
Recently Moose's mom shared with me a story from a recent visit that had us both smiling, and it illustrated beautifully the impact that he has on the patients and families he visits.  Due to some allergy issues, Moose is on a very strict diet.  One of the men he and his mom visit was determined he wanted to give Moose a gift in the form of some type of treat.  He found out Moose could eat carrots.  At his very next visit, this man was waiting with a bag stuffed full of individually chopped carrot pieces made especially for Moose.
In addition to therapy dog work, Moose has now been invited to participate in obedience and training demonstrations in a number of different settings.  Next week he will be participating in a demo at Cabela's in Noblesville!  Way to go, Moose!!  We are so proud of you!
Moose has wiggled his way into the hearts of so many including ours.  While he comes to us as a patient, we are often the recipients of his care and comfort as well.  When I'm having a particularly rough day, I can always count on one of his "leaning hugs" he is known to give when I walk in the exam room.  If you would like to know more about the type of work Moose does, we would love to help you network with people who participate in this amazing service.  Just give us a call or send us an email.